No-Roll Pie Crust recipe perfect for fruit pies, custard pie, and more. Made with oil, mix and press into a pie plate for a delicious homemade crust.

No Roll Pie Crust… Now that's my kind of crust. This particular crust is perfect for fruit cobblers, but I also like it for all sorts of pie.

This is another pie crust straight out of Grandma's recipe box. I haven't really changed a thing.

It's an oil-based crust, so the texture is somewhat different. I would say it almost melts in your mouth, and it definitely has a flakiness about it.

What I really love about it, is that it's really a no-fail pie crust. Anyone can make it. There's no rolling or fluting required. Just mix it up and press it into a pie plate. And presto! You've got a pretty tasty pie crust. Game changer!

You can make a similar crust with butter and pecans. This pecan nut pie crust is another favorite, especially for no bake desserts, like this no bake pumpkin dessert and no bake blueberry dessert.

Want to make a pie with this crust? Here are a few scrumptious ideas.

Looking for more crust recipes for your favorite desserts?

Want to actually see how to make this pie crust recipe? Watch our video!

Tools you may need to make a No-Roll Pie Crust

Mixing Bowl – I love a bowl with a handle; this one’s pretty similar to mine.

Measuring Spoons – I mean, measuring spoons. Every kitchen needs them.

Glass Measuring Cup – I use mine all the time, not just for measuring, but also for mixing up small quantity recipes.

Glass Pie Plates – This pie plate is my old faithful pie plate. I’ve had it forever, probably since we got married. Mine actually has the fluted edge sorta built in too, so you can press it in and get somewhat of a decorative edge without a lot of handiwork on your part.

Print the recipe for an Easy Shortcut No-Roll Pie Crust 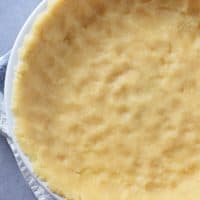 If you are making this crust with a recipe where you bake the crust with the filling, just bake it according to the instructions for that particular recipe.

Can't wait to make this crust recipe? Pin it for later! 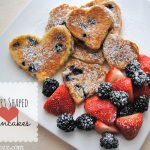 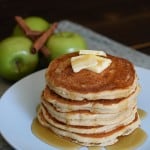 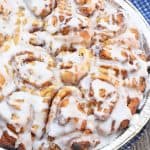 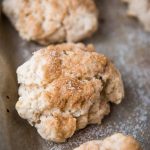 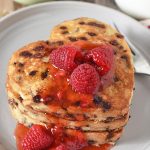 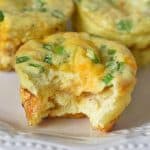