When I was about 12, we went from living in the city to living “in the country.” We lived on a farm in a charming old 2-story farmhouse.

My room had no heat or insulation (though I did have a very comfy electric blanket to keep me warm). So on really cold winter days, I’d spend my time in the kitchen; that’s how I developed my love for baking.

I remember many a time rolling out dough for my mom and grandma's cinnamon rolls recipe.

Family Recipes Are the Best

My mom taught me how to make these cinnamon rolls. Every time I make a batch, I re-live those days in the old farmhouse.

I loved rolling them out on the old pull-out wooden cutting board in our farmhouse kitchen, filling them up with cinnamon, sugar, and raisins. Raisins are very important; the more the merrier, according to my dad (and me).

Then I'd carefully roll up the dough and slice rolls.

Then place each roll in a baking pan.

This recipe also happens to be my grandma's bread rolls recipe with just a few extra steps added to make cinnamon rolls.

Homemade cinnamon rolls make the perfect breakfast treat, especially on a cold day when it's nice and warm inside.

Watch this video to see step-by-step how to make these scrumptious cinnamon rolls.

If you're looking for an easier version of this delectable treat, you'll love these Easy Biscuit Cinnamon Rolls and Bisquick cinnamon biscuits.

And if you're looking for holiday recipe inspiration, check out my list of The Best Christmas Recipes for Your Holiday Celebrations. 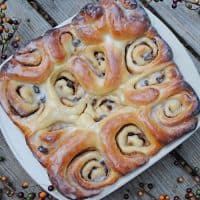 *Sometimes before adding the cinnamon sugar mixture, I'll save back a little less than half the dough to make regular bread rolls.

Can't make them just yet? That's ok! Pin the recipe for later!

8 thoughts on “The Best Most Scrumptious Cinnamon Rolls Recipe” 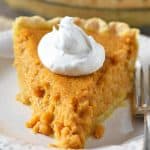 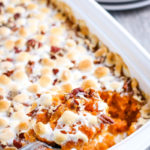 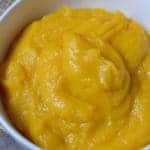 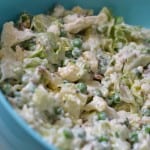 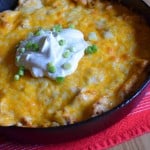 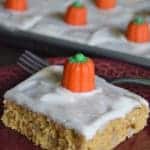