Have you ever been inside a real submarine? I'd never been down inside a submarine before a couple weeks ago. We were in Little Rock for the Arkansas Flower and Garden Show, and we were crossing over the Arkansas River, making our way home. As we came to the other side, I happened to look down and see, of all things, a submarine on the banks of the river. Jaden gasped when he saw it. Of course, we had to go check it out! 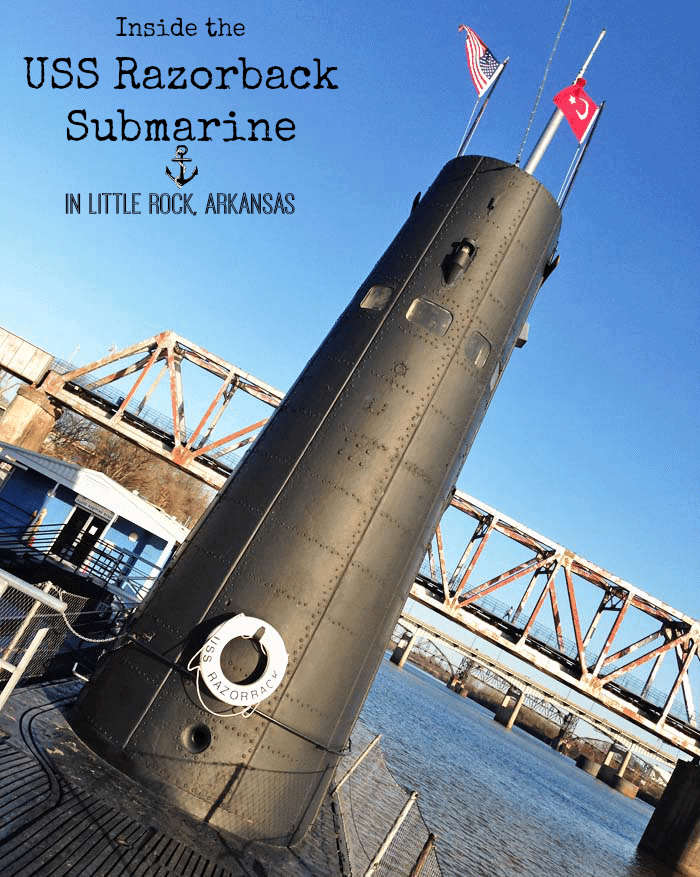 this recipe
It was one of those spur-of-the-moment roadside stops that we usually like to make when traveling together as a family. Of course, the boys were ecstatic and couldn't wait to see and explore this awesome military installation right there in the Arkansas River. 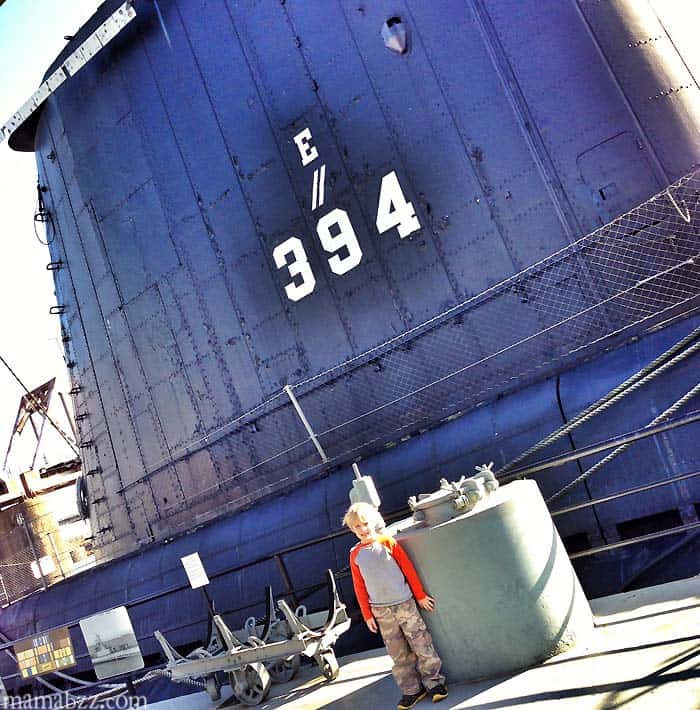 As we walked up to the location, we found that this was an actual museum, the Arkansas Inland Maritime Museum, and the submarine we'd spotted was the USS Razorback. 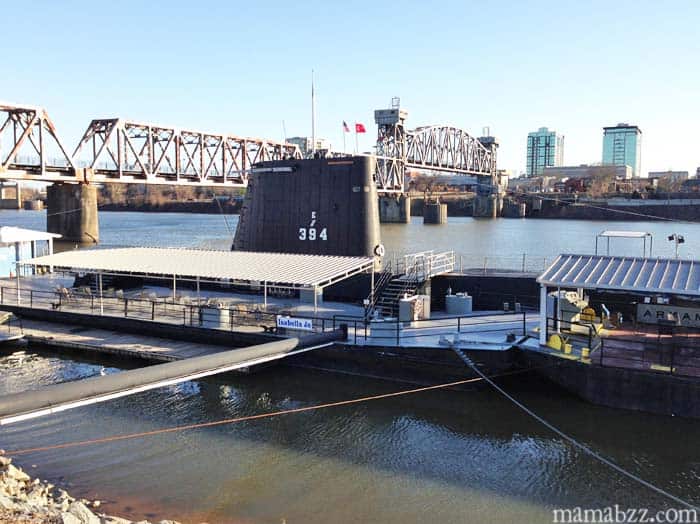 Interesting fact: The USS Razorback was, in fact, not named after the famous Arkansas razorback, but rather the Razorback Whale. She was built at the Portsmouth Naval Shipyard in Kittery, Maine. She served in World War II and in Vietnam; she was also active during the Cold War.

During World War II, she patrolled, sunk Japanese ships, captured Japanese POW's, and rescued American pilots who'd been shot down. I believe our tour guide said that 1 in 6 submarines were destroyed during World War II, and that usually meant no survivors; so, the fact that she and her crew survived is nothing short of a miracle. In fact, if I remember correctly, she didn't lose a single sailor.

In 1970, the USS Razorback was sold to the Turkish Navy, which is why there's a Turkish flag flying alongside the United States flag on the sub; however, the city of Little Rock bought the sub in 2004. 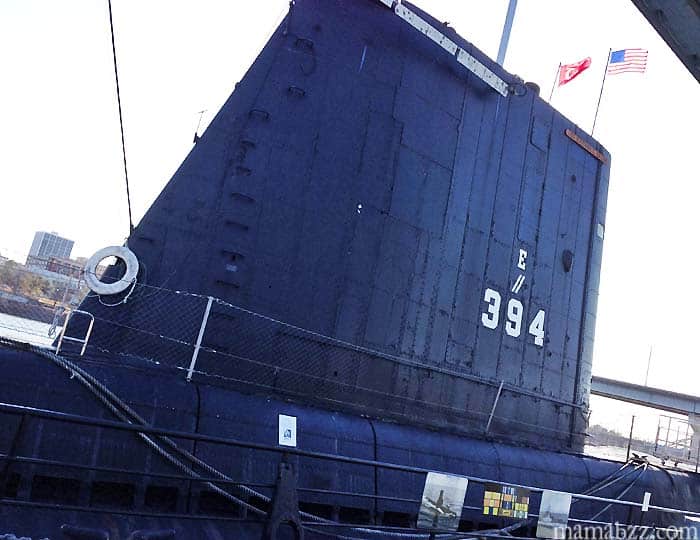 Visitors can tour the submarine, exploring both the outside and climbing down into the submarine to walk through from end to end. You can read more about her history on the museum's website.

As we met our tour guide, he told us a bit of the history of the USS Razorback, and then he took us up on the ship itself. We started at the end of the submarine, climbing down in, via a ladder and a fairly skinny hole. 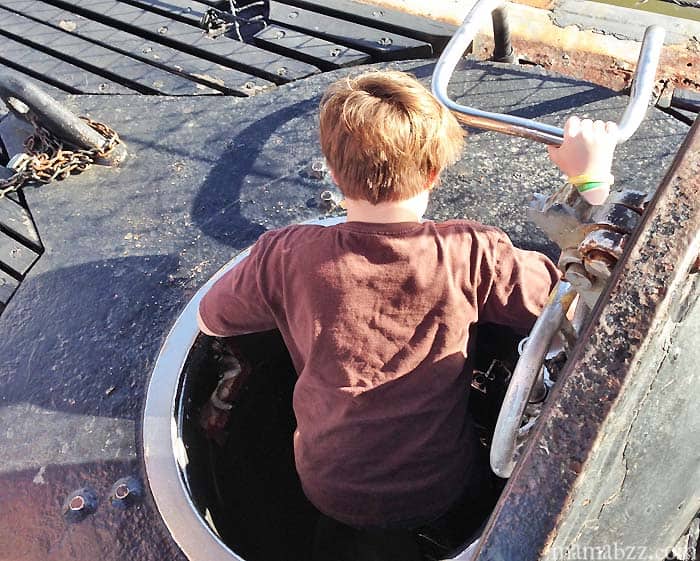 Space was tight, and as we got down in the bowels of this huge ship, I couldn't imagine having to live like that for months at a time or longer. Amazing men, these sailors who volunteered to serve in submarines, because they weren't forced into this; and only men served in submarines. Yes, the Navy paid them double the wages, but they raised their hand to serve in a sub. Bunks were tight, and just to give you a small picture, this was a top bunk that noone wanted, mainly because there was little space between the bunk and the vent, as you can see. Can you even tell there's a bunk there? 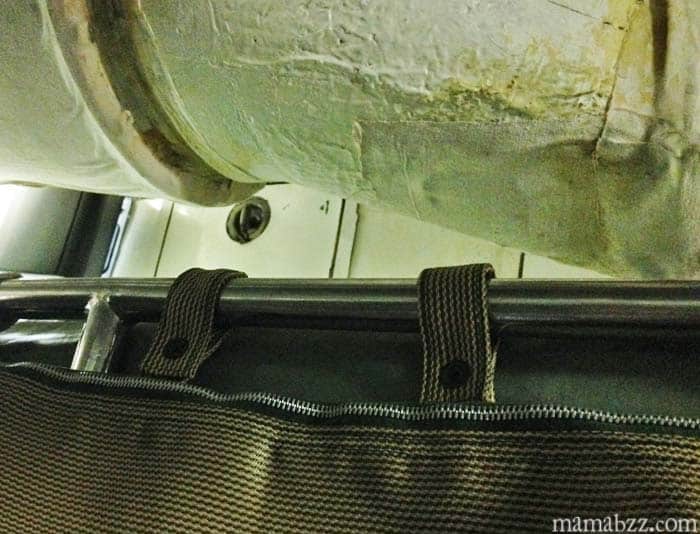 Men shared the bunks, taking triple shifts – meaning they worked one shift, slept another shift, and had “down time” the other shift. As one was rolling out of bed to go to work, another was rolling right into the same bunk to take his place. They called it hot racking. 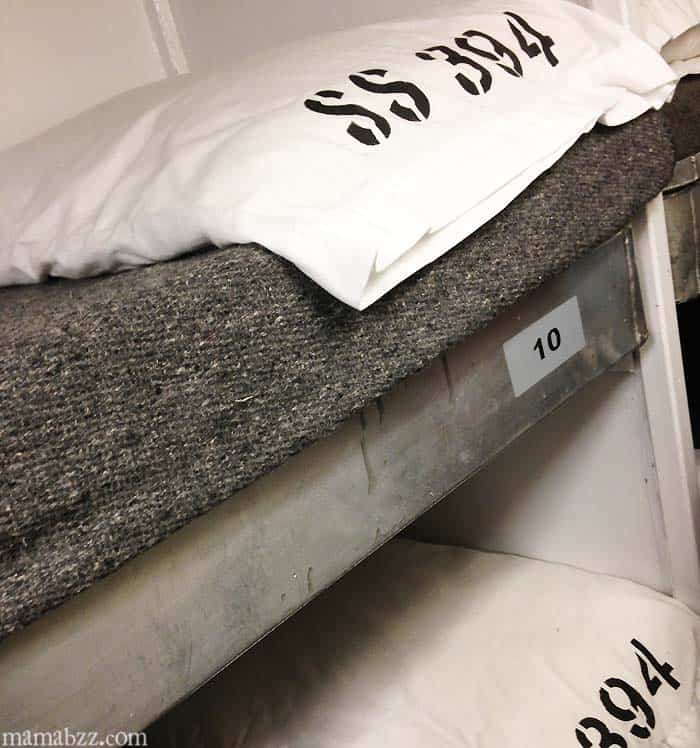 Because of the heat from the engines, the temperature on the sub stayed in the upper 90's on into the 100's. So, you can imagine how hot, sweaty, and stinky these guys must have been. Water was also limited, so they took very few showers and then only 30 seconds at a time. Our tour guide told us that they generally worked in their underwear and flip-flops because of the extreme heat.

As we walked through, we saw the tiny bathrooms, the mess hall, the kitchen, and more. 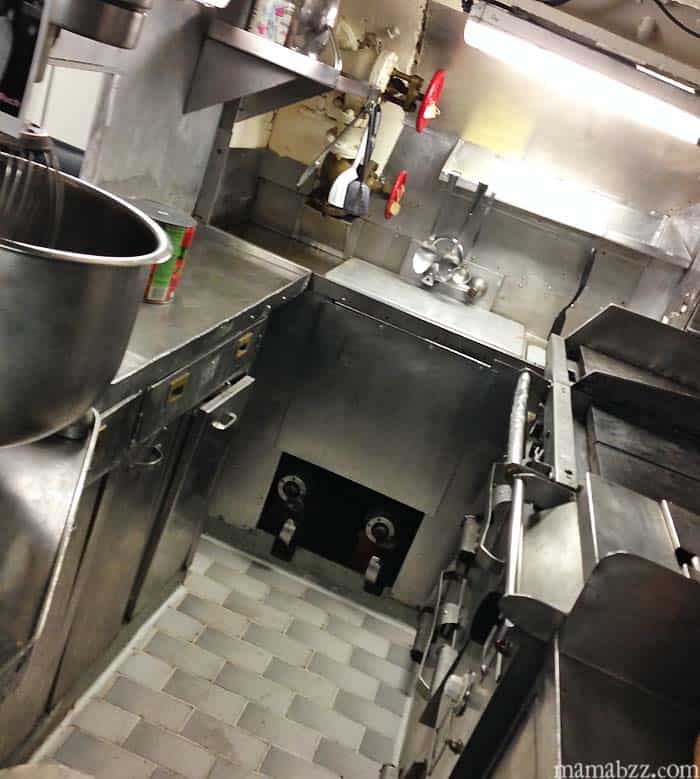 Food was stored wherever possible. The question was asked what would happen if someone died while out to sea. As a matter of fact, the body would be stored in the freezer, right along with the food. The freezer was actually below your feet in the mess hall; there was a ladder that went down to it in the mess hall floor.

The officers' quarters were a bit more roomy, and we even happened on a few Louis L'Amour books in the Officers' dining area. 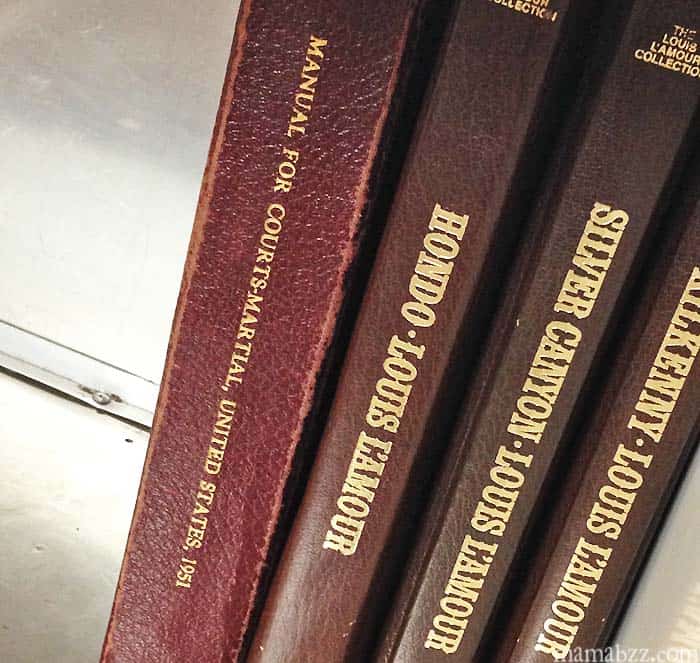 The Officers ate the same food but did have a separate kitchen and dishes; they actually used fine china.

Then there was the control room, where all the main action took place. You wouldn't believe all the buttons and levers…. 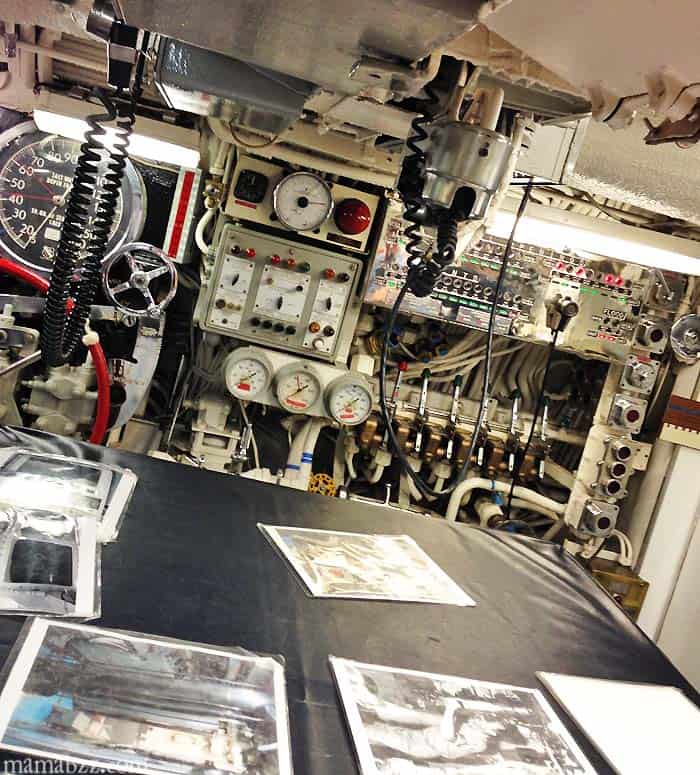 Of course, my boys were mesmerized by the torpedo room…. 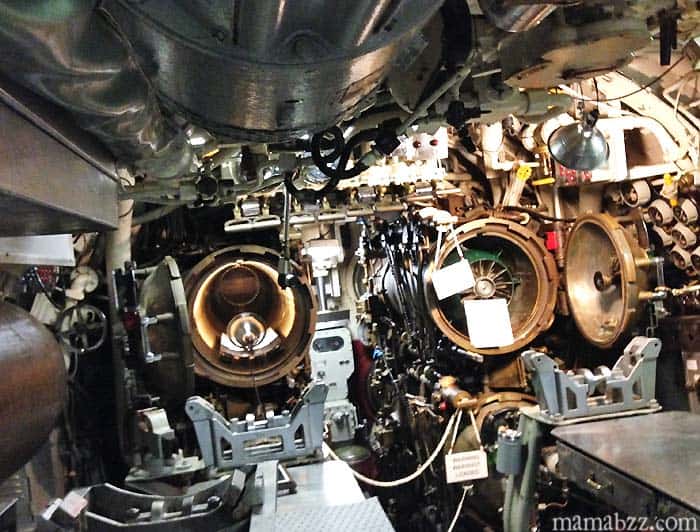 ….also with real torpedoes still in the sub, though not active torpedoes. 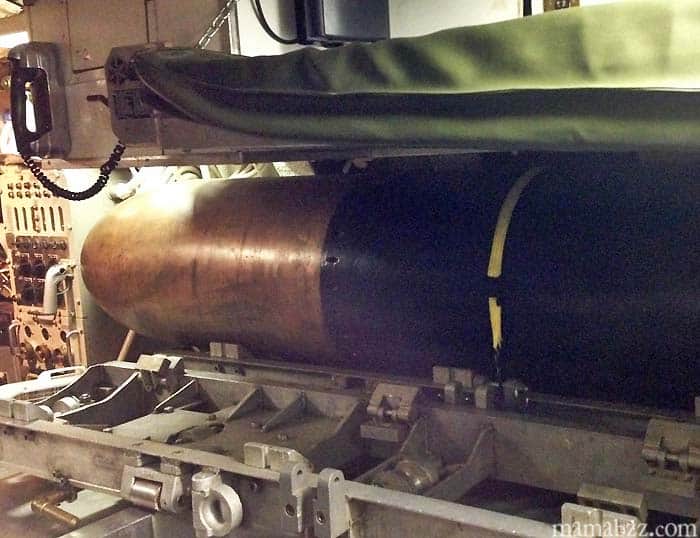 They were both asking questions throughout the tour; they just came alive with everything they were seeing and were soaking it all up.

The museum is open Fridays and Saturdays, 10am-5pm and Sundays from 1pm-5pm. Full admission for adults is $7.50; children under 12, seniors, and military are $5. Museum with no submarine tour is $2. If you are visiting, I recommend ladies wear pants (skirts and ladders just don't mix in such tight quarters), and closed-toe shoes like sneakers, no flip-flops. Between ladders and making your way through different compartments, it's just better to be completely comfortable and able to freely move from place to place.

The museum is also available for group events like birthday parties, group tours, school field trips, and something my boys got pretty hyped up about…. a group sleepover in the actual submarine with a real submarine veteran. You can find more info about the overnight stays aboard the USS Razorback here. Prices are very reasonable, in my opinion; this is something we may have to do at some point because sleepover guests get to explore even more parts of the submarine than the general public. The boys would just eat that up. As a homeschool mom, I was also thrilled to find that the museum provides lesson plans and activities on their website, as well. Very cool!

You'll also find other exhibits at the museum. We definitely need to go back to explore even more.

11 thoughts on “Inside the USS Razorback Submarine in Little Rock, Arkansas” 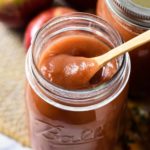 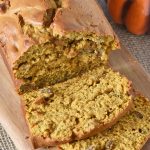 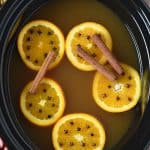 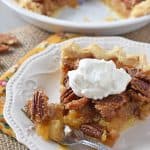 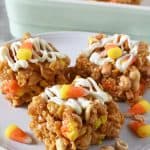 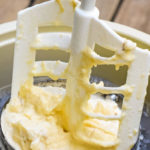 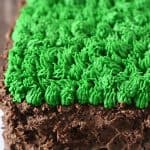 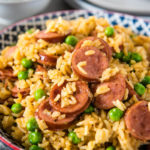